“I adore Chicago. It is the pulse of America…”


…said the indomitable actress Sarah Bernhardt, and you kinda have to agree: the city is really buzzy; or as Frank sang it: “Bet your bottom dollar you lose the blues in Chicago”. So after this year’s Annie Sloan Stockist conference in New Orleans I just had to stop off in one of my favourite places. I’ve visited Chicago a few times before, but I’ve never had the time to take it in, or take my husband David with me (seen here snapping the ‘bean’ – more on that below). 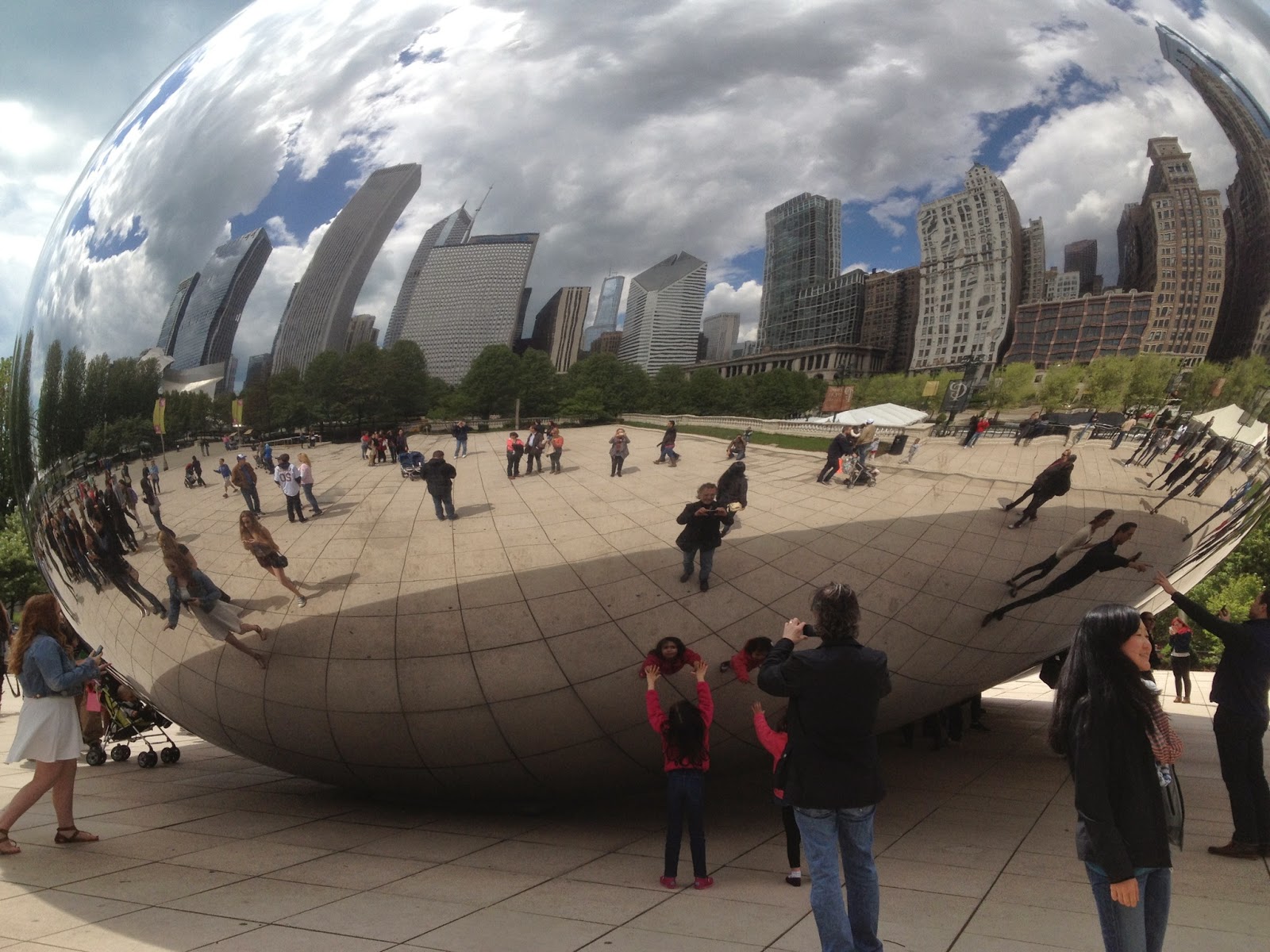 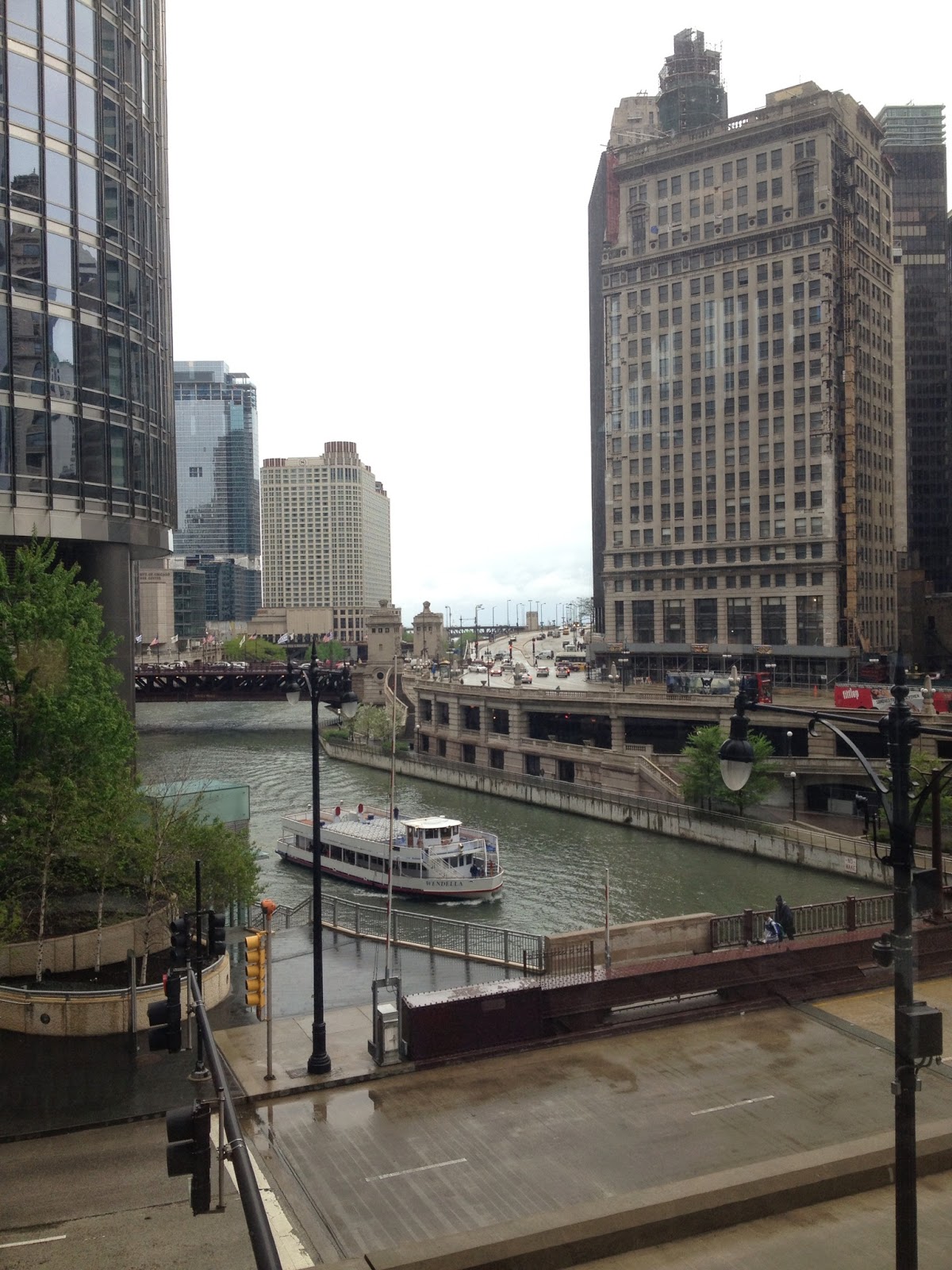 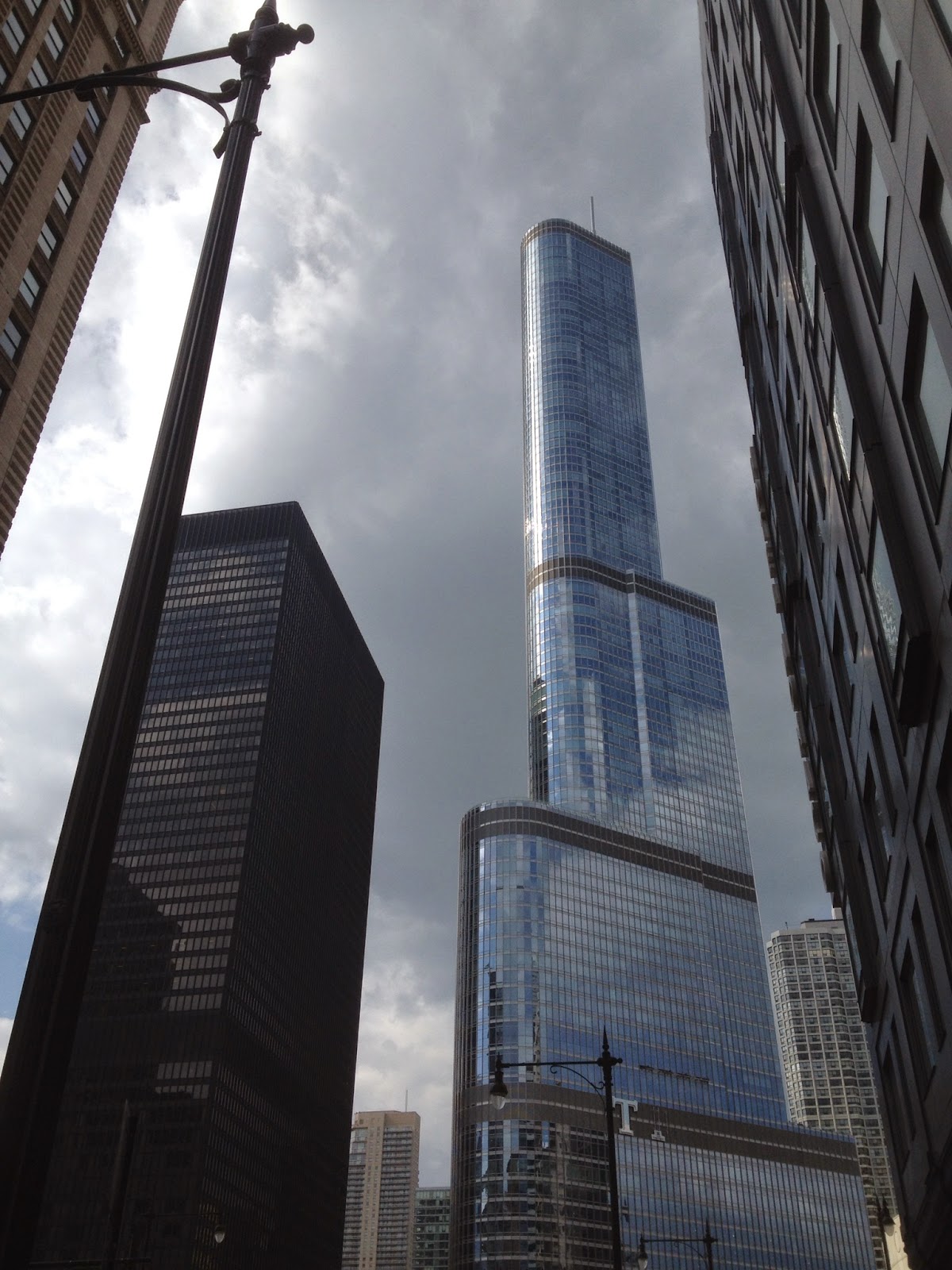 Blueprint for modernism
We stayed at The Langham, a fabulous hotel tucked into the ultimate statement in modernist architecture – the IBM building. And that’s saying something because Chicago is the city of architecture for me. The minimalist steel-and-glass tower (the dark one next to the Trump Tower above right) was designed by Mies van de Rohe, a tour de force of modernism. The building (and Mies himself) just oozes corporate power with its structure, shape and composition. At art school I studied him and the Bauhaus experimental art and design movement of 1930s Germany where he was director. The Nazis forced its closure and Mies came to the USA. He was an unreformed character who liked to puff big cigars and said stuff like “A chair is a very difficult object. A skyscraper is almost easier. That is why Chippendale is famous.” Mies own ‘Barcelona’ chair (below) is a pretty cult object too.

Since college I’ve continued to be immensely interested in the Bauhaus (see my post on Klee) and the later modernist movement – especially because of the gap between people’s perception on the lines of “oh those modern buildings are so ghastly,” and then they see them in the flesh and you hear “oh my aren’t they amazing?” You can’t fail to be impressed by those gleaming high-rises along Lake Shore and dotted around the city.

It’s certainly not painterly, it’s not New Orleans, nor Charleston House (UK) – and there’s little or no colour involved, but it still has an extraordinary exuberance and depth and boldness, which I admire. It’s actually all about form and structure and of course there are other styles to see too, such as postmodernism with its filigree and Chippendale flourishes and the flying buttresses of the early steeple style skyscrapers.

Every building here seems to beckon in some shape or form, or provides a neutral frame or backdrop for another building to emerge or stand out. It’s like having a little bit of one of my neutral colours like Paris Grey next to a bright primary such as Emperor’s Silk! 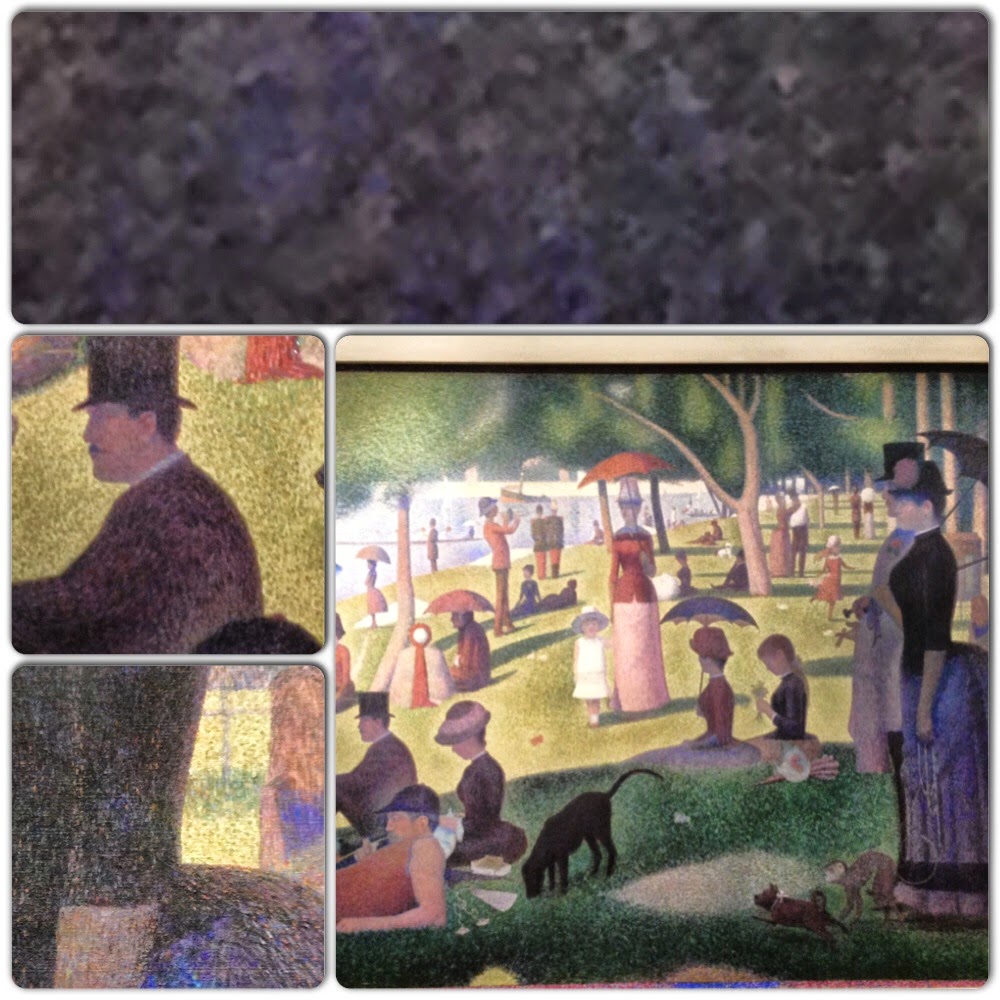 Chicago also houses one of the most amazing art galleries in the world – the Art Institute of Chicago, in which you could spends literally days there are so many wonderful paintings and furniture pieces. I really like the Post-Impressionist collection here and Georges Seurat’s A Sunday on La Grande Jatte (1891) in particular. The painting shows people relaxing in a suburban park on an island in the Seine River.


The scene is stylised, formal, with echoes of Ancient Greece but what really gets me is his mastery of pointillism to capture the qualities of light and harmonies of colour. Stand back and the black looks black from afar, but when you come in close you find it is in fact a mix of orange and blue. That’s pretty much impressionist colour theory and what I base my colours and colour mixing on.


Seurat also re-stretched the canvas so he could add a painted border of red, orange, and blue dots to act as a visual link between the interior of the painting and his specially designed white frame.

Outside not far away in Millennium Park we strolled over to walk around and under the most exciting sculpture by English artist Anish Kapoor. It’s called Cloud Gate but most people know it as the ‘bean’ for its obvious shape (also a bit like a globule of liquid mercury apparently).  It’s fun to see this gleaming stainless steel sculpture mirroring Chicago’s famous skyline and the clouds above as well as the observer!  Right next to it is a Frank Gehry piece of architecture and again that’s what makes Chicago my kinda town.

Someone suggested to me that Chicago is a sort of a cleaner, more spacious, less frenetic version of New York and I reckon that’s a very apt description.

PS. Thought you might like this ‘Skyscraper Cabinet’ I snapped at the Art Institute (by Paul Frankl c.1927). 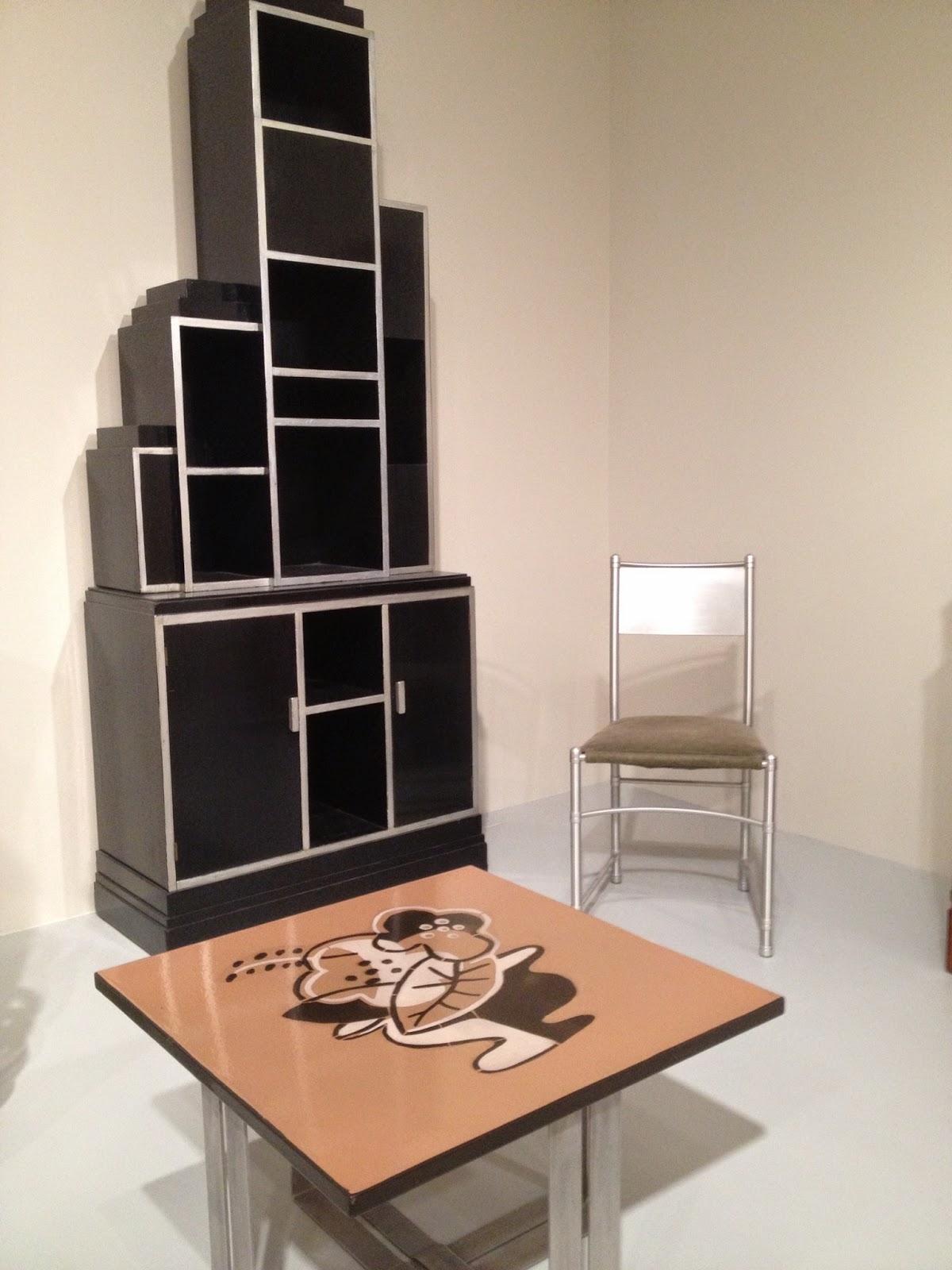