We're now a fifth of the way through the #25Project with transformation number 5, Muscatine Centre for Social Action (or MCSA)in Iowa, USA, now complete!

The wonderful work of MCSA instantly caught my attention during the nomination period for the #25Project. The centre provides emergency and temporary housing, healthcare, education and support services to local people in need, and is incredibly important to the community. I think that the wonderful turnout of 40 local people volunteering their time and services to the transformation is evidence of this!

The users and workers at this former YMCA chose to focus on transforming the family room – a room that hadn't been updated in over 20 years. I recently found out that the family suites and common area of MCSA were formerly a swimming pool, and that a generous donation from Phil Collins (yes, THAT Phil Collins) funded the cost of building a floor!

A huge thank you goes out to the lovely mother and daughter team of Cindy Tubandt and Jennifer Conard, who run Fresh Vintage in Muscatine, for organising and leading the whole transformation. They held workshops to teach volunteers how to use Chalk Paint® to paint chairs (that had been kindly donated by a local restaurant) and to dye pillows and curtains using the Shibori technique. The turnout from volunteers was so great that they managed to get the transformation complete in just the one weekend!

I love what a successful local project this has turned out to be. As soon as people heard that this transformation was taking place, more and more companies started to generously donate. From financial support to food supplies to electrical work, the whole space is now complete. It looks warm, inviting, playful and fun – a safe place of support. Well done to every single person involved in this project, it has been such a joy to see the photos of the space come in and I love this video that a local school created for the transformation too! 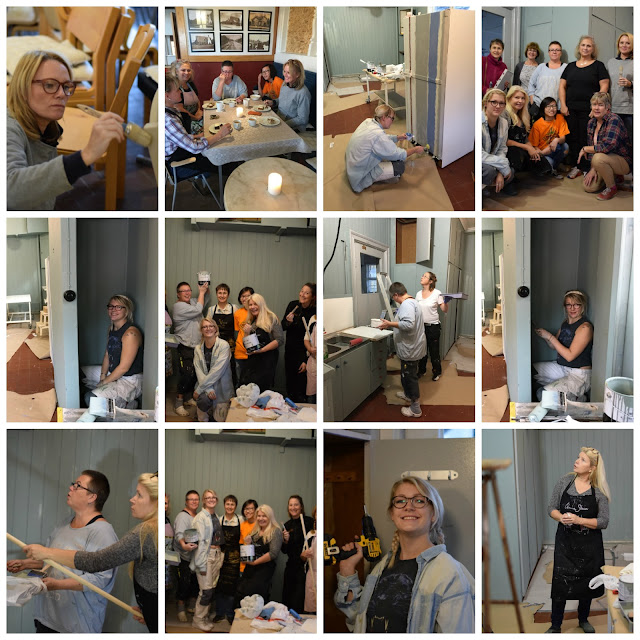 I’ve loved sharing with you the transformations of the #25Projects as they come in, and there are still plenty more to come, 21 in fact! This week the space I want to focus on is a little train station cafe in a place called Hindås, in rural Sweden.

When I picked this place as one of the spaces I was intrigued to see how the end result would look, and as the pictures were sent to me I was amazed at the incredible amount of heart and soul went in to the whole process. What truly stood out was how much of a sense of caring and community came through, and this was cemented by the wonderful description of the event sent to me by one of the volunteers, Märta Waldrop.

So lovely and moving was this letter sent to me that I think it best that you hear from the volunteers in their own words about the transformation of the space.

"On the morning of Saturday the 21st of October, giggles could be heard from a corner of the train station located in the middle of the fairly modest Hindås community. They had been going since ten, waving brushes and rollers dripping with Chalk Paint® around in a room where nobody had paid any heed for many, many years. Until now.

The room, which for many years had been nothing but a humble goods reception, was now getting a facelift. For what purpose? To make it into what would be called ‘Hedda's Room’

Hedda Rasmussen Key, who has been almost as overlooked as the goods reception that was now getting some attention, was the sister of author and suffragette Ellen Key. She was also married to a man named Yngve Rasmussen, the architect that made Hindås Train Station into what it looks like today.


When it was announced that Hindås Train Station had been picked as one of the 25 winners of the #25Project, the room that got picked to be repainted and, in a way, resurrected, was the goods reception. In the spirit of bringing back something that has been a bit pushed aside in the big scheme of things, it was decided to dedicate the room to Hedda, making sure that she had a space to be remembered as well. 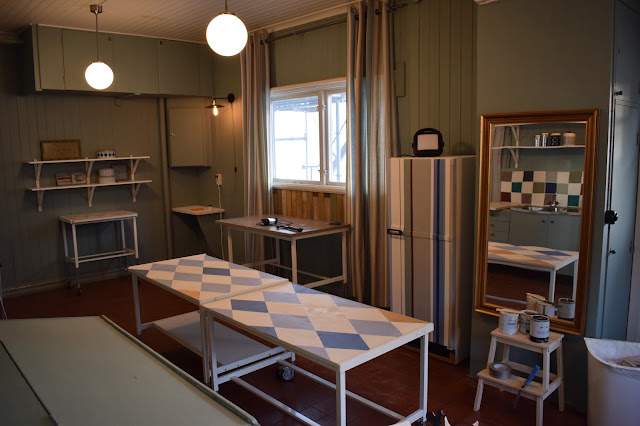 A room for a woman who lived during a time when she had no say in the community, and died after suffrage for women had become legal. In the spirit of this, although quite an alien notion in our modern times, women played the biggest role in redecorating Hedda’s Room.

Everything was painted, with the walls painted in Duck Egg Blue Wall Paint. Walls, chairs, radiators, tiles, cabinets, even the refrigerator went from orange to a striped design inspired by the fabric from the Annie Sloan Fabric Collection. Music was playing, paint was splashing, coffee was drunk, and some participants also fell over at times! Volunteers from both the local community as well as from miles and miles away came to help create this new space, and this collaboration between different people, old and young, helped infuse the walls with a sense of belonging and inclusiveness for all who’ll enter in the future. 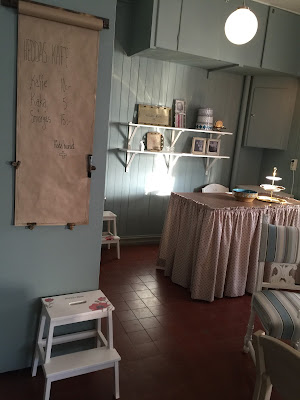 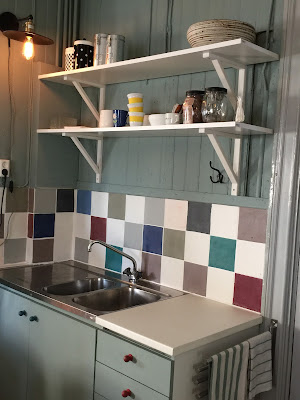 Freedom, acceptance, openness, courageousness, and kindness. That is what this room will hold. More and more people will bring their stories to this room, during concerts and theaters, as well as during the weekly language cafés. This is a room for all people, people such as Hedda.”

How utterly gorgeous is that description? I believe it truly matches with the photographs you can see here. 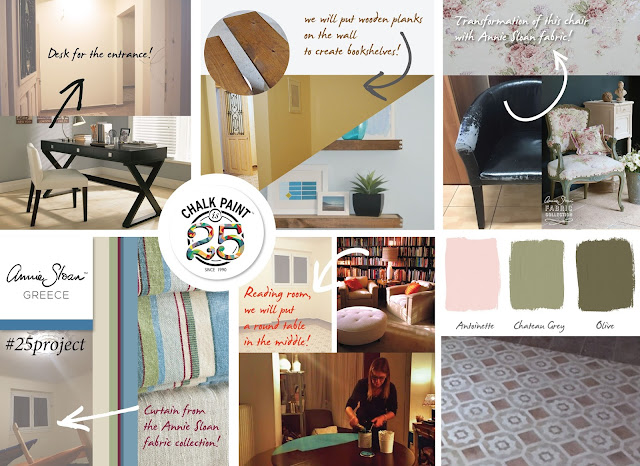 The finished #25Project transformations are coming in thick and fast, and a few weeks ago I was lucky enough to visit one of the selected spaces in Athens, Greece. This was the first project that I've actually been to visit, and seeing first hand just how vital the space is to people and the impact that my paint could make was quite overwhelming.

I was a little daunted as to what to expect, and truth be told, I was a little unprepared for my visit. What I found there and what I came with after the experience was nothing short of incredible.

The location was in an old theatre-turned-community-centre is situated in the heart of Athens. It receives around 400 visitors a month, mainly people who have been affected by the recent economic crisis. With a focus on art therapy, the day centre allows people to participate in art, drama and music, and gain general life skills.

What was needed was a quiet, serene place where the people who use the centre could come and relax. First, the basement was selected as a suitable location and my distributor in Greece, the incredibly dynamic and wonderful Elsa, along with an army of volunteers, began clearing the space. 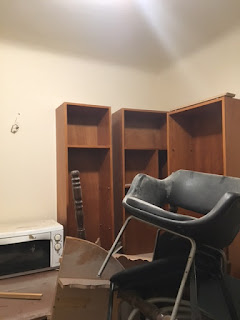 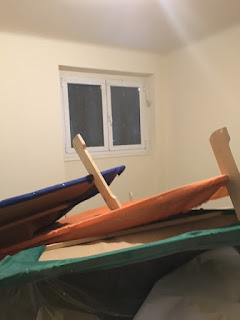 They then, with amazing determination and organisation, designed a perfectly calm space full of soothing colours and a simple design perfect for the members of this day centre. They chose a light colour palette of Duck Egg Blue, Antoinette, Versailles, Olive and Old Violet which you can see in their designs laid out in the moodboard at the start of this post. 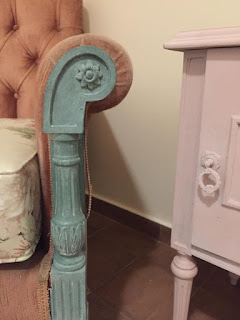 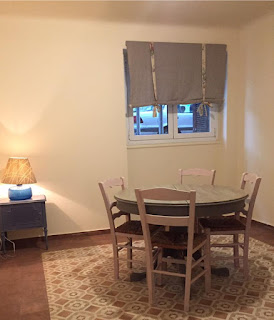 I love the way that my stencils were used around the venue, as borders and to create interesting detail to the edge of shelves. Take a look at these gorgeous details below. 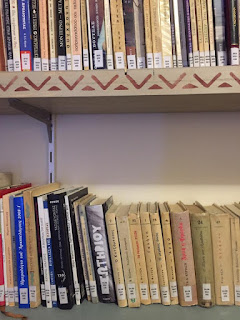 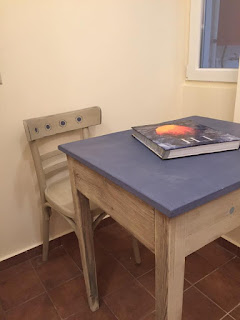 With my paint and products – and the incredible work of local stockists and volunteers – the dark, cluttered space became a tranquil escape, just what the community needed. I hope that my photos and words do this place justice! 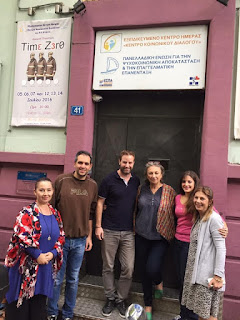