Last week I was in Paris for Maison et Objet 2016.  It is *the* big international trade show for interior design, with exhibitors – and visitors – from all over the world.  It’s so exciting, I go once a year to see for myself all the new trends.  Some of the stands are just enormous – I worked out that one was easily twice the size of my house! Often it’s where I’ll find new things for my shop here in Oxford, but this year I had my own stand there, and had a wonderful time meeting with stockists and potential new stockists from across the globe – Hungary to Japan!   (Images below- left: Shiro and Kimie Ito, my distributors in Japan, with Monika Gawinecka - my distributor in Poland. Middle: the Chalk Paint colour wheel. Right: My Spanish distributor, Maria, doing a short demo on the stand.) 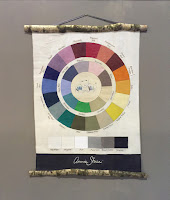 I made time to take in what else was going on – I’m so frustrated but, because it is strictly trade only, I’m not allowed to share any of the pictures I took of the other stands with you.  However, I just had to sketch out some of the amazing ways in which people are using colour.  I was incredibly inspired, and – I hope! – you will be, too.

For the past few years, the big story has been white with grey.  I love this pared down look, but somehow it just doesn’t excite me in the way that bold use of colour does, so I’m thrilled to say that this year colour is big and strong!  There were some really powerful statements: red walls, red furniture, strong splashes of bright green and yellows…yellow everywhere!  And, importantly, this wasn’t just in reference to one particular style (e.g. mid-century Modern) but across the range.  Palatial grandeur, warehouse, bohemian (of course!) all infused with the colours I know so well from the Chalk Paint® palette (Emperor’s Silk, Burgundy, Antibes Green, Greek Blue, English Yellow to name but a few).  Barcelona Orange and English Yellow worked particularly well in warehouse settings, especially when paired with Paris Grey, French Linen, Versailles…

I’ve been struggling to come up with a way of describing the colours used, and can only come up with ‘strong florals’ – these aren’t pastels, but instead the strong red of tulips, vivid yellow like daffodils, marigold orange and beautiful cornflower blues.  And in combinations which were striking and somehow exotic.  Here’s a sketch based on a stand I saw which put together Graphite with Emperor's Silk, Antibes Green, Barcelona Orange and English Yellow. 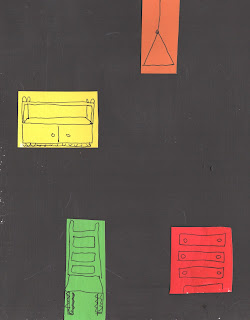 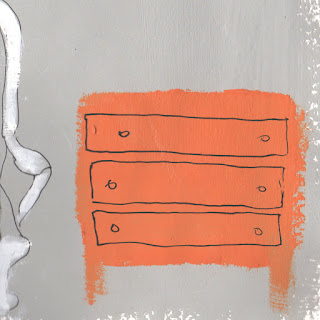 Despite this and although colours were generally more dramatic, they were also used to create some more gentle looks.  The ubiquity of white and grey has been refreshed by using colour to replace white - it is now grey with orange, or blues, or yellow.  I saw a fabulous room set made up of soft greys – so relaxing – but with one vibrant orange chair – I love it!! For this look I've used Paris Grey and Barcelona Orange from the Chalk Paint® palette. (See image above.)

I love seeing pictures of your bold colour statement pieces, keep sharing them with me using #AnnieSloan on Facebook, Instagram and Twitter! Use @anniesloanhome to tag me too!